This article provides instructions for a zero downtime upgrade strategy for IDM using a blue/green deployment.

This article is a continuation of an article about upgrading AM and IG using a in-place or by leveraging the migration service. As many deployments have constraints around this approach (zero downtime, immutable, ...), a parallel deployment approach or a blue/green strategy can be leveraged for upgrading ForgeRock IDM servers.

This corresponds to the Unit 4: IDM Upgrade in our overall ForgeRock upgrade approach.

This article should be seen as a basis for your migration strategy. As IDM dependencies are very elaborated and varied, it is very difficult to design a perfect strategy that will work with all kinds of deployments. The table below exposes the major differences between the migration service method and the scripted CREST method: 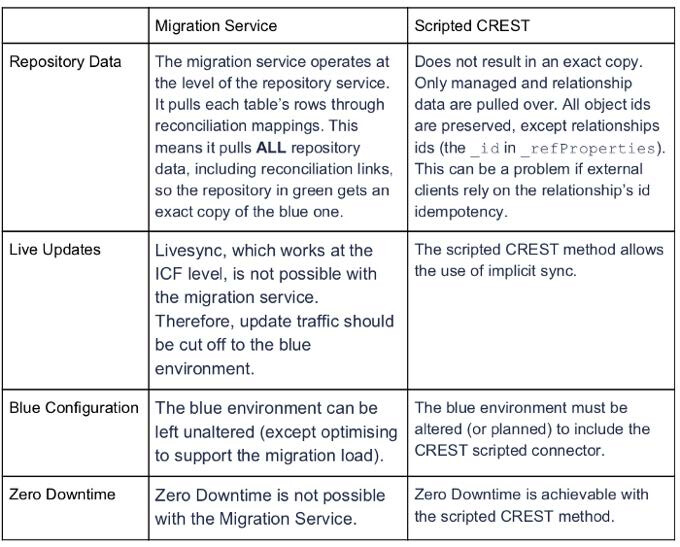 Before engaging in using the methodology exposed in this article, please check that you really need Zero Downtime. It may be that the amount of data is too big to fall within an overnight window, which prevents it from using the migration service. The solution to this may be overcome with the following measures:

If none of the above is possible, then please read on.

Note: Any managed object or configuration change made after switchover should be applied to both blue and green deployments so that no change is lost during rollback.

Although a blue/green deployment requires a high level of deployment maturity, this approach provides an elegant approach for minimising downtime for ForgeRock deployment upgrades. It is always advisable to practice upgrade strategy in lower environments like dev, stage before moving to the production environment.

Depending on the complexity of your deployment, multiple things may need to be considered for these upgrades such as customisations, new FR features, and others. It is always recommended to break the entire upgrade process into multiple releases like “base upgrade” followed by “leveraging new features” and so on.

When deploying IDM for the first time, it is always advisable to incorporate the upgrade strategy early on in the project so that any designed feature allows for seamless migration in the future. Also performing syncing to the green environment is going to impact the blue update performance as implicit syncs are all executed synchronously on the request’s thread (on 4.x, 5.x. and 6.0). Fortunately, this does not apply anymore to 6.5 when queued sync is enabled. The impact will be sensible with a high relationship cardinality, as the process requires interrogating the target system for each relationship before propagating it. This is why planning the upgrade strategy well in advance is important.

The provided CREST scripts and configuration are a starting point, and a proof of concept, which you can take as a basis to build your own based on the deployment requirements. The details are described at the crestidmmigration project. Note that a second alternative solution is proposed there, one that preserves relationships which allows running the migration service from the green environment (CREST+MIGRATION folder); however, this may contribute to a higher performance hit on the blue environment. Please note that crestidmmigration is an evolving project, and as such, some other variants could be proposed in the future, so stay tuned!


Other Articles by This Author

An Incremental Migration with IDM Integrations

Introduction [image|0x0] Traditionally, ForgeRock® Identity Management (IDM) upgrades are handled either in-place or by leveraging the migration service. Both approaches require removing the IDM instance from update traffic. This will be suitable if the migration can complete in a reasonable time, often overnight, when load is at its lowest. But, there will be a point where a large enough dataset will incur a migration time which exceeds the organization's expectation. Running a migration whil…

Introduction One new major feature introduced in ForgeRock Identity Gateway 7.0 is standalone deployment in addition to deployment into webapp containers such as Apache Tomcat. This is accompanied with a major shift in the underlying HTTP server framework. Instead of dispatching incoming requests to worker threads - as this happens with webapp containers - a standalone IG server dispatches requests onto a single worker thread, following the Event Driven Reactive pattern; this allows scaling the …

By Patrick Diligent and Laurent Vaills Introduction In the previous paper, Async Programming 101, we examined the shift from synchronous programming to asynchronous, and highlighted an approach to convert your legacy code to this paradigm. Though adopting an asynchronous programming idiom feels unnatural and leads to challenges, the ultimate reward is dramatically improved performance. In this blog, we are going to explore further advanced constructs that were not tackled in the previous blo…

ForgeRock Identity Platform: Docker Deployment From the Ground Up Setup

[image] Introduction The ForgeRock documentation provides guidance in deploying the ForgeRock Identity Platform (Platform Setup Guide). A platform deployment is demonstrated with the ForgeOps project for Kubernetes, and the main cloud providers. The repository is hosted at https://github.com/ForgeRock/forgeops, and the project documented at DevOps 7.1. The project provides the tool for deploying the ForgeRock Platform in a simple way. However, especially for novices in the DevOps field, goi…